Using Both Sides of Your Paper

I know, I know, it’s Tuesday now …  I swear I started this post with the intention of it going live yesterday. But … yesterday was one of those days where nothing seemed to work. As you will see in the video below, even my ability to glue paper to other pieces of paper escaped me yesterday. I think it was the Leap Day. My brain just knew that day wasn’t supposed to be there and threw a fit!

That’s my story and I’m sticking to it!!

The idea for this blog post came to me over a month ago. I was watching some older Shimelle Laine Sketch to Scrapbook videos and one in particular made me sit up straight and take notice. It also made me bookmark the video, the corresponding blog post, and a piece of acetate for me to try out her idea with.

Curious? Check out the video below.

Things definitely did not go according to plan with this one but I think I achieved the end result I was hoping for. A double sided layout that uses one piece of acetate I was having trouble incorporating into my normal scrapbooking process. As I said in the video, it may seem extravagant to use a whole piece of acetate (as they tend to be more expensive than a 12×12 sheet of patterned paper) when I intentionally covered up over half of it, but it wasn’t doing any good sitting in my paper racks either! Better that it’s used to tell two stories and can now go into my albums.

Here is Shimelle’s Sketch to Scrapbook Sketch where she does a MUCH better job of using a transparency to make a double sided layout. 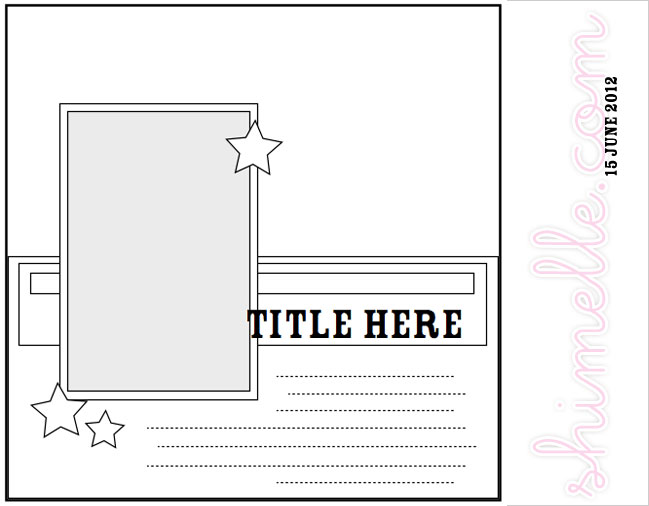 And her corresponding video.

And last  but not least, my finished layout(s).

At this point, this will be the first layout you come to in my album. I haven’t put it in an album yet, nor do I have one chosen … but it makes sense to me for this to be first. My husband coaches the girls in soccer, basketball, and field hockey. He’s what you’d call an “involved father”. Yup. I think I’ll keep him!

And here is the other side of the layout.

We live in what is commonly referred to as Hollywood North. There are so many movies and TV shows being filmed here every day that the sight of lights, dressing room trailers and the like, is so common place we tend to barely notice them. However, this year we had our first run in with a bonafide star. The co-coach was here with his family while he filmed a TV Show. It was a bit weird at first but eventually you realize that he’s just a parent like us, who wants to be involved in his kids life. Yay! The funniest reactions came from my eldest daughters friends when they figured out who he was! Priceless!

Anyway, the team did fairly well and these photos were taken at their last game of the season. I did feel that I needed to address this story in our albums though. Who knows when (or if) it may happen again! And now when we see him on TV it’s more meaningful!

I know this post is late but I hope you were able to catch up on the other Make It Monday gals. Karen from Photos Kept Alive loves sketches!  See how she was inspired this week!  And Kristie is teaching us how to stamp on tissue to add to other projects!

Have a wonderful week! See you soon.

2 Responses to Using Both Sides of Your Paper