Posted on February 4, 2010 by daydesigns

I just finished two more pages for Marley’s baby album – whooee! I’m on a roll!!
I am attending my very first crop in a couple weeks and have been inspired to get organized for it. Part of that organization is finally scrapping the last batch of pictures I’d printed of Marley’s first few weeks of life. The first page is of Marley’s first ride in a car and first walk in her stroller. Ah, that Graco stroller/travel system has seen a lot now!! But back then it was brand new. And so clean!! 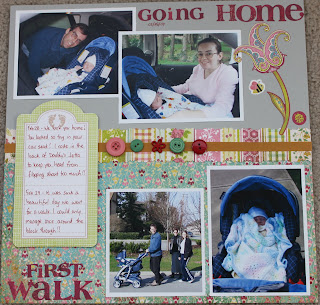 When I was setting up for this LO I decided to do it a bit different than I normally do. Normally I spend ages picking paper and figuring out how to arrange pictures. Usually by the time I’ve sort of half finalized the layout, I’ve got just about every scrap of paper I own out on the table and have so confused myself that I have to step away from the project for a bit to regroup! Yesterday I looked at the 6 pictures I wanted to scrap and knew that the 4 above were in a similar vein so could work on one page. I then found a sketch I liked and looked for a piece of cardstock to use as the base. I said to myself that I would just pick one and go with it and I did! All in all the layout above took me maybe an hour or so to complete. Pretty quick for me!! 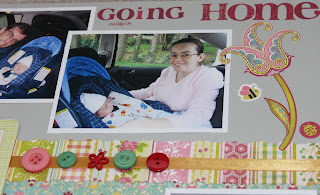 Are you diggin’ the glasses on us both? mmmm … Since then Greg’s had laser eye surgery and I’ve got a new pair of (I think) trendier specs! Eye surgery for me will come but since my eyes are so bad that it’s not going to be the “simple” procedure that Greg had, I think I will wait until I have the time (ha!) and money (double ha!) … so, like, never, right?! Digressions aside, the walk we took that day (2010 looks like it could have another warm, sunny late Feb too!!) was just around the block. That was when I realized that you really CAN’T push out a 9lb 4oz baby and expect to feel like walking a few days later!
The next page was of Marley’s One Week check up. I’ve titled it Dr. Lori as that is who our doctor was back then. She has since retired and we have a fabulous new doctor who delivered LC but Marley and I still miss “Dr. Lori”. 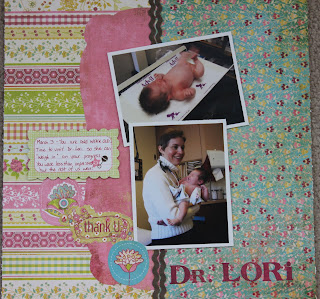 I was in the middle of working on this when the new Sketchy Thursday layout was posted so I decided to alter my original idea (which wasn’t very well formed anyway) and use their sketch. I think it is better now than whatever I would have come up with! 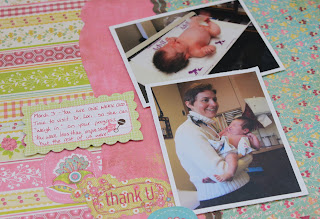 Alright, we’ve got her first week down … only …. a bunch more to go! LOL!
Today I am thankful for …
… sunshine!
… time to create …
… coffee (again – LC is sick and not sleeping well!)
If you liked this post, say thanks by sharing it with your friends.